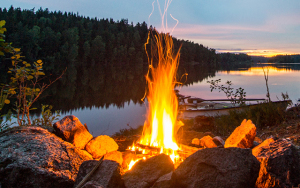 Alice Ann Pickles, 75 of McGregor passed away Monday, March 21, 2022 at her home near McGregor.  She was born April 9, 1946 in Brainerd to Custer Albert and Edna Louise (Kottke) Nelson.  She grew up in Garrison, MN and attended Brainerd High School. Alice was united in marriage to  Howie Junior Pickles on May 12, 1962 in Aitkin.  They lived in several places before settling in McGregor in 1969. It was there that they built their family home and raised their children.  Alice was a wonderful mother and homemaker. She loved living in the country, sewing, baking bread and gardening. She and her husband, Howie built the Fireside restaurant in McGregor in 1977.

She was often at the restaurant, usually found in the back prepping food for the Sunday buffet with kids or grandkids in tow or chatting and laughing with the customers. In addition to helping at the restaurant, she managed the Galaxy Roller Rink that she and Howie built and operated for several years. She enjoyed roller skating and getting to know the area youth, remaining lifelong friends with many. They also opened the Country Meadows Inn which Alice managed. Again, making many friends among her employees and customers.

As busy as she was, we always knew family was her life. She was proud of becoming a grandmother at a young age, and had the energy and stamina needed to keep up with the little ones. She could often be seen cheering them on at their school programs and events. Every summer she joined her family for the annual North Shore trip. Often she would be the first one in line as we hiked up the trails. Many memories and laughs were enjoyed around the campfires. She was always up for adventure, traveling to visit daughters Julie in Key West and Wendy in Anchorage, often accompanied by daughter Holly from McGregor.

Her granddaughter Erika and family had recently moved up north, giving them all the gift of even more precious time to spend together, gathering at her house often for family dinners and bonfires. She had a true love of the outdoors, and cherished all the wildlife that could be seen in her backyard. Several years ago she began kayaking at nearby Portage Lake, walking down to the lake and hopping in her kayak sometimes several times a day. She loved being on the water, so peaceful, surrounded by nature. She also enjoyed snowmobiling during the winter months. She loved getting together with her siblings near the family farm in Garrison where she grew up.

She was Preceded in death by her parents Edna and Custer Nelson and her sisters: Virginia Worley and Joyce Eder.

Grateful, loving, kind, appreciative, and humble, with a great sense of humor and warm smile are just a few of the words that describe this kind soul that has left us way to soon. She will be greatly missed by all of her friends and family that include: her husband Howard Junior Pickles

And many other special relatives and friends.

A private service for family and close friends will be from 12pm – 1pm Saturday, March 26, 2022 at the Fireside Inn, McGregor.  Wolfgang Sixl will lead the service.  A public gathering for everyone to celebrate Alice’s life will follow from 1 to 3pm Saturday at the Fireside Inn, McGregor.  Arrangements are with McGregor Funeral Home & Cremation Services of McGregor.  Go to www.srtfuneral.com to leave a message of condolence for Alice’s family.

To send flowers to the family or plant a tree in memory of Alice Ann (Nelson) Pickles, please visit our floral store.